Two years later, there would a split in the church and the Rev. Carl F. W. Hustedt, along with a group of members would organize Bethel Lutheran Church on March 6, 1898.  Bethel began meeting in Albright's Hall on Chene and Pierce Streets.  Later, the congregation purchased a little frame church on Arndt Street near McDougall and finally erected a new, brick building at 2455 Mt. Elliot Avenue (now New Harmony Baptist Church).  Bethel would later merge with Gloria Dei Lutheran on November 2, 1947 to form Cross of Glory Lutheran Church.  Cross of Glory continues in operation today and is located at 16661 E. State Fair, Detroit, MI.

After the establishment of Bethel Lutheran Church, the following pastors ministered unto the congregation:
A number of valuable improvements on the church property were made during Rev. Baum’s pastorate.  Three bells and a pipe organ were purchased at a total cost of $1,500.
During Rev. Worthman’s service, the desirability of a new location made itself strongly felt.  The increased immigration from southern Europe had given an entirely new complexion to that part of Detroit.  An opportunity presented itself for the sale of the church property and after mature and thorough deliberations the venture of selling the old and buying a new property was embarked upon.  It was sold for $13,500 to the First Christian Reformed (Holland) Church of Detroit that is now located at 1444 Maryland Street, Grosse Pointe Park, Michigan.  The building would later be occupied by St. Paul's African Methodist Episcopal, now located a bit further north on Chene and Hunt Streets.  In October of 1966, the City of Detroit decided to purchase and develop a great deal of land in this area as part of the "Elmwood Park Rehabilitation Project #1, MI R-40."  It is believed that the church building was demolished around this time as the entire area was cleared with the exception of the Sidney D. Miller School on Dubois Street between Jay and Waterloo Streets.  To relocate was the proper thing to do, and later events proved wisdom of this move.  The new building lots, located on Fischer Street at Canfield, were purchased August 24, 1916 from Mr. Hugo Koehler and wife for $4,500.  It measures 120 x 102 feet. 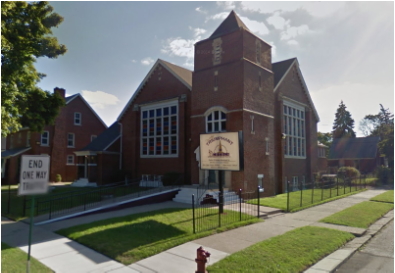 The following pastors ministered unto the congregation:

Our history continues in the chapter titled "First-Bethany."
Powered by