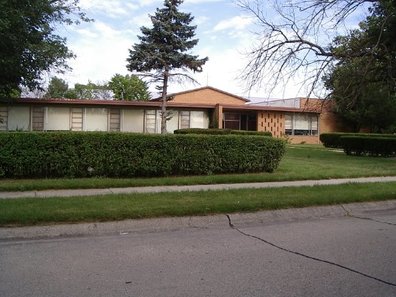 On March 18, 1953, First Evangelical & Reformed Church and Bethany Evangelical & Reformed entered into an agreement to merge. Located only a few blocks away from one another in the Historic Indian Village neighborhood, the resulting congregation became known as First-Bethany Evangelical & Reformed Church.  The two churches held discussions on which church building should serve as the location for the newly found congregation.  Therefore, it was proposed that both buildings be listed for sale and that the church building being sold first would not become home to First-Bethany.  First Evangelical & Reformed sold first, thus resulting in First-Bethany beginning at the former Bethany Evangelical and Reformed location.  It was also decided in the merger agreement that a "suburban" branch location would be created.  The city of St. Clair Shores was identified as this location and on November 18, 1953, a 2 1/2 acre parcel of land was purchased on Harmon Street near East 9 Mile Road.  The Rev. Dr. Emil N. Krafft, followed by the Rev. Dr. Edwin J.A. Koch served as pastors of the congregation on Seminole Avenue in Indian Village until it closed in 1969.  The Rev. Arnold Lambarth served with the new congregation that was organizing in St. Clair Shores.

In its early years, the First-Bethany congregation of St. Clair Shores worshipped in the gymnasium of South Lake High School. Groundbreaking for a new building was on Sunday, February 13, 1955; the cornerstone was laid on June 12, 1955; and the congregation worshipped for the first time in the new building on East Sunday, April 1, 1956.

The United Church of Christ was established on June 25-27, 1957 as a result of a merger between the Evangelical and Reformed Church along with the Congregational Christian Churches.  After the closure of the First-Bethany location on Seminole Avenue in Indian Village in 1969, the St. Clair Shores location continued to worship until 2006.  At this time, a proposed merger was entered into with Faith-Trinity UCC in Warren and several members of First-Bethany began worshipping at this congregation.  The building was then listed for sale and after some time, finally sold in 2009.  Today, the building is occupied by the Everlasting Word Church of God in Christ.  Shortly before the 160th anniversary, the dissolution of First-Bethany UCC was decided at the meeting of the Detroit Metropolitan Association of the UCC on April 25, 2009.  Since this time, Faith-Trinity UCC in Warren has also closed and many of the former members of First-Bethany have decided to worship at Hope UCC in Fraser.
Powered by